Whenever I drop off and pick up Jackson and see the other moms dressed for work, I feel guilty. Like, what am I doing all day that I need to take my son to school three days a week? Soon after Archer was born, Jack’s teacher asked when Archer would be joining them at school in the infant class. “Er…not for a year or so?” Her puzzled look really embarrassed me. I know she was curious how I managed to maintain my position as a high-powered executive/surgeon/senator while having my infant at home with me, and I couldn’t bring myself to tell her that taking care of my home and my family is my job, except three days a week when she is in charge of Jackson.

Though I still think about the look on her face and how stupid I felt, I have decided my situation is my situation, f*ck you very much. Jackson going to school a couple days a week is helpful for me so I only have little Archie to drag to the store and watch me clean the house (he’s very helpful), but school is far and away more beneficial for Jackson than it is a ‘break’ for Mommy. He was so very shy before he started school at almost 2 years old, and had never spent time with anyone outside his family, except for visiting the doctor.

Getting him comfortable with school was a brutal and emotional process for both of us. He would cry even as we pulled into the parking lot of his school and would burst into tears of relief when I came to pick him up. But in between, I knew he was having fun. I had a rough pregnancy with Archer, from hyperemesis gravidarum until 6 months, to a gall bladder attack, to the return of nausea at 8 months, I was not meeting his playtime needs. He needed to run outside and finger-paint and dance in the middle of the day. He needed to see other kids his age struggling with the same new skills he was working on, and build confidence in his abilities.

When Jackson started school, he regularly used about 20 words. Jackson was reserved when it came to speech, and wouldn’t repeat sounds or try words he wasn’t 100% confident he was saying correctly. Since he never spent any time with other children, everyone around him said things right on the first try, and I think that is one reason he was shy about working on language. Who knows what the myriad other reasons were. Now, we can’t get a moment’s peace because Jackson gives us a running commentary of everything going on around us and in his head. He is starting to respond to open ended questions like “what did you do at school today?” though he nearly always answers with what he had for lunch.

So no, my kid doesn’t attend school so I can eat bonbons on the couch. He goes to school because it has made him positively blossom and he LOVES IT. He tells me who his “fwends” are, and that he made a picture for Nana and sang songs. And that’s extra wonderful for us, because Mommy’s body is kind of a lemon, and though it has produced two beautiful babies, it breaks down from time to time.

I’m positive Jackson’s teacher was just making conversation and wasn’t out to shame me, but I shamed myself just the same. Since then I have decided I absolutely don’t care what people think. I thought about having a Mommy blog before, but I didn’t want to deal with 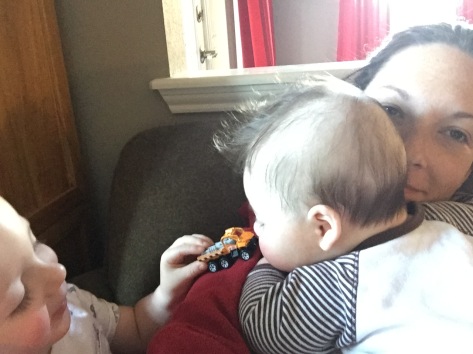 people commenting about my choices. It’s not like I do anything radical like spit chewed food into my kid’s mouth or whip them with a switch for breaking the rules, but everyone has an opinion about something. I can usually skip the judgement and go straight to “different strokes for different folks, man” when I see other Mommy posts online, but I couldn’t skip the judgement on myself after realizing a lot of the other kids at school are there because their parents are working other jobs. And yes, my job as a mom and homemaker is important, but working moms also have to be moms and homemakers as well as doctors and lawyers and accountants. But you know what? This is what works for us. Jackson is developmentally leaps and bounds ahead of where he was 8 months ago, and while some of that is just his age, I know school has helped. Plus, he’s not scared of doctors and nurses anymore because he’s used to other adults in his life. Win, win, win, win, and win some more.

When I saw that parents were invited to Jackson’s Friendship Party last Friday (because Valentine’s Day is clearly too sexually charged…) I immediately shamed myself all over again. What if I’m the only parent that shows up because everyone else is busy doing actual important work and doesn’t have time to watch their kid cover himself in yogurt? I had never seen Jackson interact with his fwends and teacher, so I decided I was going and would act cool if I was the only Mom there. Yea, I did this on purpose, you know, to help the teacher.

My favorite thing about all the allergies and dietary restrictions of kids today is that you aren’t allowed to make food for parties. You sign up to bring a pre-made food still in the original packaging, with nutritional information clearly printed on the side. I love to cook and bake, but there is always that one parent who is secretly a pastry chef and shames the rest of us, so it really takes the pressure off to just bring in a package of mini muffins and call it a day.

I showed up to school for the party and, to my surprise, the parking lot was full, as was the entire street! I strapped Archer to my chest after parking down the block, and walked into the school, which was bustling with activity and parties in each classroom. About half the parents came, because yea, some of them are in surgery/flying rockets to the moon and can’t leave for a 30 minute party.

The teacher set out the food and Archie started to fuss, so I was swaying and bouncing in the corner when another set of parents came in. Mom said “we brought juice boxes (from the pre-approved list)” and after an awkward pause she said “my daughter has never had juice before! I don’t even know what kind is right, so I got organic?” After I had talked myself down from the shame-ledge just to get into the party, I was feeling pretty zen about motherhood at this point. I wanted to take her aside and tell her to chill the f*ck out, because you know what? The school *suggested* that juice be brought to the party. No one would have even noticed who brought the juice. In fact, I signed up for mini muffins and my grocery store only had a variety pack which included chocolate and that is basically a cupcake without frosting. Your kid shows up to school in clothes of varying cleanliness without suspicious bruising and at a healthy weight? It’s going to be just fine. Some moms give their kids juice. Some juice their own garden-grown beets. Different strokes for different folks, man.

Another mom looked embarrassed that her kid asked for more cheese. I could just hear the shame-wheels turning. Will they think I don’t feed her enough at home? Does she eat too much dairy? Does the Mom with the beads in her hair judge us for not being vegan?

My kid had eaten three cheese sticks at this point and was hopping around the room holding his crotch. But I had two kids in that room that I was responsible for, and both were healthy, clean(ish), and loved. So whether you’re a vegan, beet-juicing dreadlock Mom, a tattooed, no haircuts-for-my-kids Mom, or an exhausted, hard-working jobs outside and inside the home Mom, I suggest you give zero f*cks what the rest of us have to say. You have enough to worry about. Like keeping your kids alive and getting play-doh out of the carpet. So if you see my kid picking his nose or asking for french fries, assume that is a bad moment and the rest of the time we have our shit together and just move on with your day, because my situation is my situation, f*ck you very much.

Unless you give your kid a weird name. Then I judge the crap out of you.