I love having access to the wisdom of my friends and family at the push of a button. Whenever I have a parenting question or need a recommendation, it’s easy to post my query on Facebook and get feedback from anyone who can offer it to me. I can select the appropriate recommendation for me by assessing the social media connection who posted it; a sleep-training tip by a mother of four, a makeup tip by my friend with seemingly flawless skin, etc.

Recently, I asked the hive mind for mascara suggestions for a more curled look. I have a lot of trouble with mascara smudging and flaking all over my face (I have allergies so I’m an eye-toucher) and if a product doesn’t work for me it’s wasteful and expensive to trash opened makeup. So I checked in with my Facebook friends to get tips on a new mascara that came recommended by real people rather than Amazon bots.

The candidates included Rimmel ScandalEyes, Honest Company Mascara, Lash Princess, Benefit They’re Real, Milk Kush Lash, and Glossier Lash Slick. I wanted to give every product a multi-day trial before moving on, but I have picked a winner! Full disclosure: I use an eyelash curler before applying mascara, and do not use a primer except in the case of one mascara that came with a primer.

I had already purchased the Honest Company mascara, recommended by my Instagram 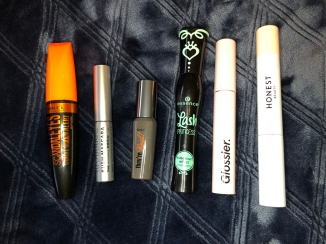 pal Jessica Alba. This one has a primer at the other end of the tube to build length before you apply the pigmented mascara. I really wanted to like this one because of the gentle ingredients and my love of Ms Alba and her beautiful, natural-looking makeup, but I was disappointed. I had to order it online which upped the price, and despite the two-step process, my lashes were too heavy and wouldn’t hold a curl. It’s also very wet and a bit gloopy – I had to use a lash comb to fix clumps every time I used it. The initial look is nice with some extra effort, but its too heavy to hold that lifted look.

The Glossier ads for dewy, youthful skin with enhancements rather than full coverage have appealed to me since they appeared on my Facebook feed, but I do all my makeup purchasing at Sephora, and they don’t carry Glossier. The nice woman at the store assured me that Milk Cosmetics was so similar to Glossier in formula and intent that even the packaging was a dupe. I tried the brow gel (a great product) and a sample size of their Kush mascara as my free gift for my birthday. This is a nice one, and it does lift and separate my lashes. However, when worn with the rest of my dewy I’m-trying-to-look-youthful routine, there is major smudging. For me, there is almost always some residue from mascara under my eyes, but given the choice between flakes and smudging, I will take flakes any day. They are easier to brush off and won’t remove your concealer, which you desperately need because you are not, in fact, youthful. Also, when it’s not a free sample, it’s $24.

Amazon recommended Lash Princess, which is actually available in Target, but was always sold out at my location so I broke down and ordered it for a dollar more online*. It will give you subtle volume and length and some curl to boot, with an average amount of flaking. Maybe it was overhyped by the thousands of five star reviews, but I wasn’t wowed. It’s about as good as anything you’d find at the drug store. *When I bought this it was more expensive than grocery store equivalents, and now it’s is steeply discounted on Amazon.

And then there were the suggestions from my social media makeup gurus. I chose to buy Rimmel ScandalEyes Curve Alert first, because I had to buy bananas and this brand is available at the grocery store. The brush is bushy and lifts my lashes to create a curl, and there is minimal flaking of product. It is on the drier side, and I found it difficult to swipe all the way up my lash and get it to the ends for more length (my lashes are blonde at the end). I didn’t need it to add length, but the product has so much friction it didn’t brush on smoothly. However, this product is available wherever you buy diapers and coffee, and it’s the least expensive, so it is a good backup to have on hand. This brand has lots of different formulas for length and volume and curl, so there’s a good chance there’s one for you.

It’s funny how we talk ourselves in to things, isn’t it? I’ve lusted after Glossier products for a year and never purchased them because all my birthday gift cards are for Sephora. But then my childhood friend suggested their Lash Slick and I thought, that’s it! I’m ordering it right now. She would never lead me astray. I got a sample set of several products to try, even though I’m fairly sure their target demographic is studying for midterms right now rather than applying night cream. The Lash Slick glides on smooth from root to tip, providing separation, length, and lifted curl that lasts. Just about everything they sell is buildable, which makes their products really versatile. Want a light coverage concealer to make you look more rested? Dab on a little. Want to look like you regularly sleep until noon? Dab on a lot. Their mascara is no exception, so if you want it a bit more dramatic, keep swiping. It is definitely not about crazy clumpy volume, so if you are looking for a falsies equivalent, this isn’t it. There are some flakes after a few hours of wear, but since it’s a drier formula, they are easy to dust off. I also prefer their Boy Brow to the Milk eyebrow gel, and their serum has a beautiful shine without looking oily.

The last product, They’re Real by Benefit, I bought in a mini tube in case I didn’t like it. I had used it before and remembered it being really effective, but it was so hard to remove (I never buy waterproof because it’s too hard to get off without irritating my skin or losing lashes). Now that I use oil-based eye makeup remover and a special towel rather than disposable facial wipes, I figured it was worth a shot one more time. This is the real deal, y’all. Length, curl, separation, and even some realistic looking volume, all with little to no smudging or flaking. It has staying power, and is removed more easily with gentle face wash and eye makeup remover that I remember, but my lashes can feel a bit tacky afterward. This is also the most expensive mascara I tried, with the mini tube coming out to about the same price as the full-sized tubes I tried.

The Verdict: I am very particular about products that harm the bits they are meant to enhance, so while They’re Real is the clear winner, I will reserve it for special days when I have on a full face of makeup and can spend time carefully removing it. It looks the best and lasts the longest, but I’m wary of the tedious removal process on my sensitive eyelids. I wear the Glossier Lash Slick for my every day mascara, and the thinner formula comes about 90% of the way off with just a gentle face wash, and I follow up with makeup remover if I need to.

I rarely throw out a product that’s less than perfect, convincing myself I’ll use it someday, but I threw away the Honest Company mascara. I got it on Black Friday, but it currently sells for $16.99 on Amazon and it is noticeably less effective than the $8 stuff at the drug store. It was by far the most disappointing.

I’m sure it seems outrageous not to include the Thrive mascara since the videos of girls swiping on the product and tripling their lashes have gone viral. But if they wanted me to try it, they shouldn’t make it $24! I didn’t want to spend the money on a brand I’ve never heard of, so I read several detailed reviews that all said the same thing: yes, it looks amazing immediately after application, but it’s a wet formula that isn’t buildable and your lashes will droop within a couple hours leaving you with straight lashes. Since I had recently had the same issues with the Honest Company version, I didn’t bother with Thrive.

The Benefit mascara is the same price, but you can pay half for a mini tube to try it out, and Sephora accepts returns if you don’t like a product, so there is very little risk. And though I am loyal to Sephora, I am definitely a fan of the Glossier products and will be checking out more of their makeup in the future.