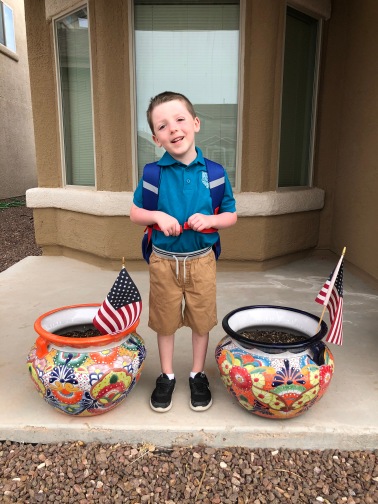 My first born moved to The Big School this past fall, and the transition has been a difficult one. My kids have really enjoyed going to school together, and whenever one is having a rough day, the teachers bring in a sibling to comfort them. I trust those teachers with my babies, and we drive thirty minutes each way to get to that particular school because it is “nut free.” The Big School is “nut aware,” which I’m fairly sure is BS because they serve peanut butter at breakfast and lunch. My anxiety about peanuts ended up being shoved down the list of Top 10 Things to Freak Out About as my kid started school, however.

I took Jackson to register for the new school in April of last year. It took hours and he was a trooper, even though he suddenly got a fever halfway through and felt crumby. He was nervous, I was nervous, and I was emotional about my biggest kid getting even bigger and more independent. We got started on the school supplies list, got all the important medical forms for kids with peanut allergies and asthma, and shopped for uniforms (I love that all the public schools here have uniforms!).

A week before school started, we went to his new classroom and met his teacher, who seemed lovely. Our school is brand new, and construction was only completed a day or two before the start of the school year. Everything was shiny and colorful and spotless, but I worried if the larger class size would leave my sensitive boy feeling lost in the crowd. And how is the staff supposed to remember which kids are allergic to peanuts when there are hundreds of them all wearing the same clothes? We had been so spoiled by the small classes and individual care at our preschool.

I was a mess of feelings, sobbing while trying to decide what kind of breakfast a Big Kid eats on his first day of school, and whether he would prefer hot lunch or something homemade. And honestly, I had been having nightmares about school shootings for months.

Three days before school started, his backpack was packed with his school supplies, the new lunchbox I’d ordered had arrived, and I took the tags off his new uniform. Two days before school started, someone from the registrar’s office called and said, “your son can’t be in kindergarten. He must be in first grade. There is nothing we can do about it, so just send him to a different room on the first day of school.”

Great, heaving sobs escaped my throat while on the phone with a complete stranger who was, in my mind, ruining my kid’s entire life. Jackson was born on August 31, and in Texas the cutoff for school is September 1. Within a few days of his birth we had realized we would need to hold him back a year so he wouldn’t be the youngest and smallest kid in the grade. People hold kids back all the time, especially little boys, because they mature slower and have a harder time sitting still and learning to read. He was due September 16. If he had been born on his due date, he wouldn’t be allowed to be in first grade. When I registered him in April, I pointed out to their staff that he would indeed be 6 by the cutoff, but we were holding him back anyway. The woman said, “sure! No problem!” because people do it all over the country, all the damn time.

Because Jackson was technically old enough, he did a kinder program at his preschool last year. A lot of the parents had trouble with the teacher, but we didn’t complain, because why bother? Let Jackson enjoy this low-key program, even if he can’t read at the end of the year, because he is going to “real” kindergarten next year! Let him be young while he has the chance, before homework and tests and all that garbage. Jackson is very sensitive and, at the beginning of the school year when he was technically old enough for kindergarten, he would cry that he wasn’t smart and couldn’t write his own name. It would take us a couple days to get him to complete it through hiccup-sobs and a little bit of rage. Seeing this, we knew we were making the right decision starting him a year later. He still sometimes got clingy at drop off for preschool! How on earth would we send him into a new school, where we weren’t allowed to stay in the classroom until he was settled?

But, according to the school district, we were not allowed to make the decision that was best for our kid. I’d known him for 6 years, but sure, you guys should totally decide if he’s ready for first grade. I called my aunt who is a retired teacher and she got principals and school board members on the phone across Texas who agreed we should be able to hold him back, but our district wouldn’t budge. My husband met with a school district official who did the same patronizing furrowed brow followed by, “hmm. Is this your only child?” that I received in my own search for answers. Like, what the actual fuck? No ma’am, we are capable of loving multiple children this much.

When it comes to ruthless parenting, we are all familiar with Mama Bear, who seems sweet but if you push her kid off the slide she will drop kick you over the swing set. During this ordeal, I was introduced to Daddy Lawyer. First he held me and lamented that we’d lost an entire year with our son, who would now potentially be going to college a year earlier, and then he threw himself into the legal aspect of what had happened. He read the guidelines and our district was clearly misinterpreting the rules about entering first grade. Then he searched for case law to support our side and wrote some sort of manifesto. But by this time Jackson had started school and I was wary of switching things up on him when he had happily walked into school on the first day with his brave face on. Plus, I didn’t want to burn it all down when all three kids would be going to this school eventually. Suing the district would take a long time and be really messy, and if we won in a few months would we rip him out of his class and put him in kinder after he had adjusted so well? Nope. It would feel like a punishment to him, since he had worked hard and caught up but clearly his parents didn’t have any faith in him and thought he should be demoted.

The school did what they could, and I had a meeting with the education specialist for first grade and the principal where they told me they had tested my son to see if he could handle the academic challenges of first grade, and they determined he was more than qualified in math, but would struggle at first with reading. Well, of fucking course. You learn to read in kindergarten, which he was supposed to start this week. If he had gone to kinder as planned, they could have identified him as a candidate for GT and given him extra math challenges while he learned to read, but now he would be behind, maybe forever. The registrar tried to calm me down by telling me her son was constantly six months behind and it was totally fine, but that only made me more angry. He doesn’t need to be behind, he needs to be in kinder where he will be the oldest instead of the youngest.

Jackson does not generally struggle academically, and did just fine in the low-key kinder program he was in last year. But emotionally, he is certainly in kindergarten. He doesn’t need academic stress that might make him hate school from such an early age. But we lost our appeal with the district and when we talked to him about maybe switching to a charter school, he got very serious and choked up and told us he had worked hard to make friends and didn’t want to go somewhere new. I figured having a kid who is a little behind in an environment he loves was a better option that moving him after a month of school. So, our kindergartner is a first grader.

After a rough start, he is doing very well. His teacher is wonderful and knows exactly which questions each kid missed on the incessant standardized tests they take every month. It is not in her DNA to let a kid fall behind. She is so proud of Jackson’s progress, especially since he didn’t go to public kindergarten where he would have been exposed to this type of computerized testing for an entire year before arriving at her door, and she shows him how proud she is by giving him more work. Jackson adores his teacher and is proud of himself when he makes a higher score at each testing period, but he struggles with the weight of the drills and extra vocabulary she sends us for him. He has no time to just play, be creative, and have fun. He is six.

If we had known the district would force him in to first grade when we registered him in April, we would have worked on reading all summer until school started. We aren’t the parents who think our precious little angel requires allowances and special treatment, so if this is the rule, then we will just have to deal with it. But we had no warning, and this decision that we made when our son couldn’t even lift his own head was no longer ours to make. I’m sure there are folks who would take advantage and just put their seven year old in kinder to give them a leg up, but it should at least be assessed on a case by case basis. Our kid has the feelings of a little boy because he is a little boy. He comes home and tells us the kids tease him for being younger, and laughed when he lost his first tooth in class because they had all lost several teeth by then. Kids are dumb, but they are also mean, and I don’t want my kid subjected to bigger, stronger, meaner kids picking on him in the future. At this age, a year makes a huge difference.

We have mostly recovered from this dramatic episode, and are comforted by Jackson’s rapid improvement and bond with his teacher, but those first couple months I was an absolute wreck. His first week of school I repainted the kitchen on a whim, and did not do a good job. I purged the kids’ clothes and then found myself sobbing about my kid growing out of a pair of shorts, “because he’s just such a big boy now that he’s in kinder…first grade! *sobs incoherently*.” And the first weekend after he started public school, there was a shooting at Walmart and twenty-two people died, and I debated never sending any of my kids to school ever again.

Now that he is doing well, the school thinks my husband and I are absolute lunatics for wanting to hold him back, but we are worried about the years to come when he is noticeably less mature than his peers. Everyone knows someone who went to college at seventeen and turned out fine, but that isn’t really helpful because instead of being “fine” he could have been thriving at his own pace. But we weren’t allowed to make that decision.

2 thoughts on “On the Way to School”